Home › News › Apple and IBM Team up for the enterprise 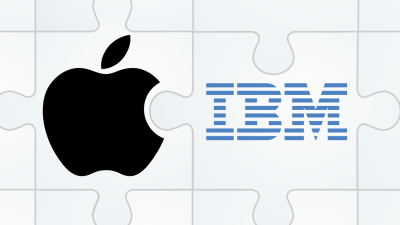 Following two years of complete secrecy and planning, Apple and IBM have announced a deal to combine iOS devices and IBM’s business-oriented products and services. The deal means Apple now has a better enterprise offering than at any point since its inception and capitalises on Apple’s existing strengths while bringing in a partner that understands business needs. IBM also gains from this – tying its solutions up with the most popular mobile platform will help it maintain its software and services offering.

Calling the deal “historic”, Apple CEO Tim Cook told CNBC, “this is all about transforming the enterprise, we’re just trilled.” In a press release the firms said their partnership, “aims to redefine the way work will get done, address key industry mobility challenges, and spark true mobile led business change.” IBM CEO Ginni Rometty said the deal will deliver “growth for both companies”, and promised the firms would tackle mobile security issues in the workplace.

Under the partnership, Apple and IBM will deliver over 100 industry-specific enterprise solutions, including native apps for iPhone and iPad; IBM Cloud services optimised for iOS, including device management, security, analytics and mobile integration; new AppleCare service and support for businesses; and new “packaged offerings” from IBM for mobile device activation, supply and management.

Microsoft and Google are threatened. Microsoft are shedding staff while restructuring as a productivity solutions provider, while Google has failed to achieve wide adoption of Android among enterprise users who won’t accept the platform’s fragmentation and weak security. “The users that Apple and IBM will be going after with this deal are exactly in the crosshairs that Microsoft has been going after with Windows Phone,” Charles King of Pund-IT told Computerworld.

Android currently has little penetration into enterprise markets. While Google Docs among small and medium-sized businesses, large enterprises want more privacy than it offers. Samsung has been courting business users, but with little success. The deal with IBM lets Apple meet both foes with strong evidence with its platform is ready for business.

IBM will also be able to sell Apple products to its own enterprise customers, supported by its own teams, which should help Apple get iOS devices into industry sectors (such as energy or infrastructure) that it hasn’t yet penetrated.

SAP and Oracle are challenged because the deal puts IBM’s enterprise solutions inside the mobile industry that they have been building. Blackberry will suffer as Apple gains the enterprise clout it needs to finally displace much of its remaining market.